What His Darkness Reveals (Book 1) 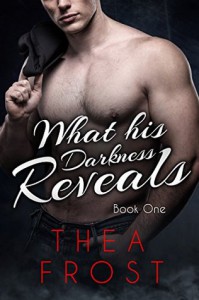 What His Darkness Reveals by Thea Frost tells the beginning of the relationship between Jack Deckard and Bryce Fischer. They meet in a bar and are immediately drawn to each other. Unknowing to them at this time, they're both undercover police officers and Bryce's next assignment is him. He's gone rogue, or at least that's what she's been sent under to find out.

Jack Deckard, from his thoughts and the way the author has written him, it's obvious that he's powerful. His confidence and desires are plain, plus something about the way he thinks makes it clear that he's going to get what he wants. He's very likeable, despite that he's sort of meant to be the bad guy. He's very charismatic and charming as well. Bryce Fischer's story about her past is fairly interesting. Her thoughts and feelings are fairly natural and she's a very likeable character for me. Together, I think their characters work well as a romance. I know it's meant to be some sort of alpha book, but I like the way that Bryce still has some level of control over each situation. When she visits his home, she's able to withdraw her consent when she feels like it and Jack is fairly respectful of it. In the same way, I appreciate that he still maintains some level of an alpha male quality, that though he doesn't have dominance over the situation, he's still a powerful man within the scene.

I like having the internal narration of the pair. However in the beginning of the book, because they're both looking over the one scene at the bar, it's kind of repetitive because they're both thinking similar things about each other. Though, the narration means that the events aren't really explained properly. It's not obvious, in the beginning, about what's going on. It's essentially a man and woman looking through the group of people in the bar to perv at each other. I read the blurb of the book on Amazon, but the beginning of the book just doesn't seem like a few undercover officers. Bryce especially doesn't seem like this; nothing about his narration is very indicative of his role like that. I understand that she only finds out that he's her target later on, but I think the situations could have been explained better and the opening scenes don't get the actual plot going well enough. I would have appreciated a little bit more input from Jack's perspective. His narration is only in the beginning and at the end, with a big portion of her narration in between.

Overall, I think that the author writes well. They have a manner which expresses intrigued, with a touch of mystery. They convey the characters feelings very well, so much so that as a reader, I empathise with each of them. It's a pretty interesting book, though fairly short, and I'd love to read more in the series.

I "bought" a copy of this from Amazon.com.au when it was free. These are just my honest thoughts.
Tweet