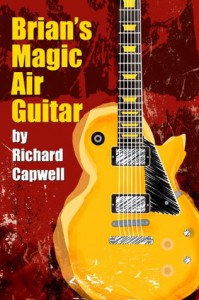 When Mr. Tilson, Brian's English teacher, demands that his students keep some sort of journal, Brian is a bothered. Being that he's dyslexic, he knows that he doesn't read or write very well. However, Mr. Tilson gives Brian the option of making an audio journal. During these tapes, Brian talks about his life in the City, his friends and family.

The plot was alright. It wasn't terribly interesting. It's essentially about a kid who has a missing father, an abused friend and a potential career in music. To save up for a new guitar, he and his friends begin a little boat cleaning business. The book doesn't really go anywhere important. It's essentially a lot of little plotlines and stories that have been merged into one. None of them were especially interesting or even had some sort of major importance to me. They were all one note without any really ending to any of them. Many times, the author tries to mock other media by having the narrator comment, "if this was a tv show..." Yet, the thing I find odd is that the story commonly relies on situations that one might find in the television shows and movies he so mocks. It's just so ridiculous that Brian (and Jamie) only found his father by looking at CDs, under the assumption that he might be famous 'cause he's in a band. Then later on, when Brian is at their show, the father looks down into the crowd and notices Brian. He immediately realises that it's his son and jumps down into the crowd to talk to him. It's not only that, but also that Brian makes comments about not having a happy ending. Yet, he quite clearly did. He now has a father who is going to pay for all sorts of things in his life, who also has a new wife whom Brian is really pleased with. He has a new foster brother. He keeps on whining, but he actually has a pretty good life, despite the misery that the author is trying to push on us. I was also kind of disappointed in the short story that Jamie wrote, which became the title of the overall book, "Brian's Magic air Guitar". Just because it's the main title of the book, it just makes it seem as if it ought to be some really important plot point. Yet, the story fell really short of the importance that the author places on it. I also felt that the author kept on placing importance on things which weren't really important in the plot, like Brian being dyslexic.

Overall, it was kind of dull. It wasn't horrible. However, it was just a story without any intention. It says a lot, but doesn't do much. I was disappointed. Three stars.
Tweet