What a Kiss Can Do 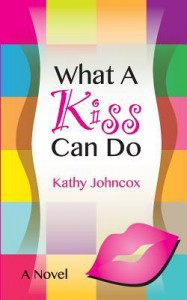 I was lucky enough to win a copy of What a Kiss Can Do by Kathy Johncox via a Firstreads giveaway. Despite receiving a free copy, this review is just my honest opinion of it. The first thing I'd like to saw upon completion of this book is, "AWWW!" Ignoring that for one moment, I'll get to the rest of the review.

In the beginning of the book, reporter Rita Jensen has not much interest in love. One night, she's called to a Christmas party on assignment, unfortunately for her. She doesn't want to attend; generally because she doesn't really like those types of things and she also holds a strong dislike for the regular occurrence of mistletoe at these types of events. Though, this Christmas party and the mistletoe at it might prove to be a little luckier for her than it has in her prior life. She begins a relationship with a long-time friend, as well as meeting a new man who proves to be somewhat charming. The coming months prove to be challenging in many ways. She finds herself amidst all sorts of new experiences and opportunities.

The characters were all very unique. I felt that I could relate to all of them in some way or other. Firstly, Rita was a very special character. She's very kind, curious and willing to take on new opportunities. I appreciated how she tried to look into news stories about town, embracing what the people around her had to offer. It was very nice and heart-warming to read into her life. I really enjoyed reading about the things she experienced, reading into her thoughts and curiosity about the new events in her life. I found her to be somewhat intelligent, hard working and really loving. Fergie was really quite an interesting character to read as well. I liked his enthusiasm for his photography. I also like how loving he was towards Rita. I could certainly understand his later choices. I know that we weren't privy to his thoughts, but I understand that it must have been difficult for him. I think the author wrote the scenes with him particularly well, especially later on in the book. I, personally, don't hate him. However, considering Rita's perspective, I can see why she dislikes him and what he did. Derek! Oh my gosh! Derek! Early on, in Rita's relationship with Fergie, I kept on thinking that I would kind of prefer her in a relationship Derek. It just seemed so natural to me. Going by their early conversations, I just thought they were so sweet together and they were a match in terms of intelligence as well. They spoke well to each other and every moment they shared together just seemed to be so genuine and natural. I just felt that they were truly meant to be together. As a character, I consider him to be somewhat interesting. He was very unique and I thought him to be very loving towards Rita. As for background characters, I think all of them were well written. I enjoyed the work scenes with Boss, feeling that she was a very kind woman. I liked Rita's family members, the mother and Jen, who both seemed to be very nice people with interesting stories of there own. I even liked the various people Rita interviewed for the paper and felt that a lot of them had interesting stories to tell; it was nice to see the author encouraging people to notice the various arts about town, which subsequently got me considering about the arts within my own town. Overall, I really understood all of these characters. It was clear, to me, the motives of them and all of their thoughts and actions were completely understandable.

The plot was incredible. It takes all sorts of various plot lines and intertwines them incredibly well. There's various plot points that are quick, like the newspaper pull out portions. However, there are also longer plot lines, like the relationship stuff. There isn't much unnecessary plot, save for the visit to a gypsy and the plot with the possible UFO sightings. I think that some portions went a little bit quickly and skimmed over some things. However, I liked the overall pacing of the novel; it covered the time period quite well and gave a good impression of what had happened during the skipped moments.

This novel was a beautiful display of a well written book. I will definitely reread it in the future; it was such a special story and I thoroughly enjoyed it. Five stars!
Tweet