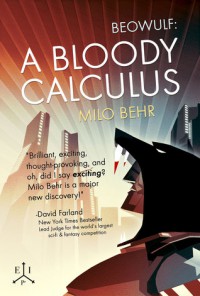 Beowulf is the type to put on a show. Well, that's really his job. He works with Lawrence Booth, the DJ of a show. Beowulf hunts down criminals and Booth obtains a sentence handed down by his viewers. While Beowulf saves the day, Booth broadcasts it to his viewers in the hopes of good ratings. That's what the future is like. This is how justice is in the year 2104.

At first the book is difficult to get into and, subsequently, it's taken me a while to read. I think the main problem is that the beginning is a broadcast to heaps of viewers, but it gets a little bit convoluted because the author needs to explain a lot of information at once and it's confusing due to that. The overall book reminds me of a few other futuristic plots I've read or seen. I first thought it very similar to Demolition Man. However, it's also like the Dredd franchise is what it seemed most familiar to, for me. Though, instead of Beowulf choosing the sentence, it's done by a public choice. The thing that most seemed reminiscent is that essentially it's a one man crusade against evil, which is what makes it seem kind of cliché. Except, with Beowulf, much of it seems like more of a performance. In the midst of battle, he is still trying to make it look cool to the follow cams. He snipes one liners and tries to make his kills look better for whoever might be watching. Or reading, in this case.

In fact, it's cliché in a lot of aspects as well. In some areas, it just seems like a generic action movie where we begin with a bunch of people doing bad stuff for, what we don't understand but seems like, no reason. The good guys get confused at this. Instead of doing his job, Beowulf takes up his own investigation and uncovers more than a ton of other people combined can. My main consideration is that he never would have found out the criminal plot without his female companion telling him to look into something. In fact, that's one of the other things that bothers me. He stumbled upon the answer to the problem quite easily. He was literally looking into something else and, through that, found out everything he needed to know about the criminal mastermind behind the plot. We go through a few more action scenes and then we even have our bad guy running through his whole plot and reasons behind his work. It seemed very much like a lot of movies where the bad guy can't keep his mouth shut and confesses just to pass the time in the book. Later, he actually gives a few reasons for his criminal confession, one being that he actually did need to pass the time. Sometimes, in the book, I can't make my mind up. It sometimes seems like a plot from a generic action move. In other portions, it kind of feels like that's the direction the author is putting it through deliberately; is if it's some sort of parody of those types of movies or other related media.

Let's get back to Beowulf. He's a one man army. From the beginning descriptions of the author, he seems big and strong. He wears body armour and is awesome at everything he does. Though, he seems somewhat weaker as we go along because he relies on the decisions of the public to lay down his version of justice. He essentially, in his reality, is an actor where his only job is to do what the public want from him. It just makes him seem, to me, like a very weak person. Sure, he would probably best me in a fight, if I'm honest. However, he wouldn't be able to without someone else telling him what to do.

As for other characters... They seem kind of generic as well. Alexis is probably the most useless character. We get introduced to her by happenstance. She's just walking along and bam, we find out who she is. It turns out that she's a model, beautiful, smart, and other kind of generic qualities to make her seem better than she is. I don't deny that she's beautiful or smart, but her entire presence just seems really unnecessary. She commits crimes and then Beowulf immediately wants to take her to his home and keep her. It's his job to deal with justice but somehow, when she becomes involved, he turns kind of incompetent and can't seem to do it anymore. Later on, we get some scenes at his place and she tries to have sex with him. She doesn't even bother seducing him, she just wants to have it off with him because she's bored. She actually says that in the book, too; that the only reason she wants to have sex with him is because she's bored. Later on, she provides minimal interest. She pretty much just lazes about his apartment and looks beautiful. She's generally unlikeable because she is kind of whiny, demanding and also useless. She just seems like such a wasted character that could amount to more. Bennett seems equally generic. His wife died and that's his main reason for doing what he does in his life. I won't go into that because it provides spoiler-ish aspects, but his entire plot line is kind of cliché.

I actually liked the premise of the book. I think the futuristic world was created reasonably well. There are all sorts of futuristic devices and gadgets that seem interesting to me. The better part of that point is that they all seem realistic and the author doesn't stretch it too far. What I mean here is that they could have added anything they wanted, but here it's believable because they've created gadgets or technology that seem fitting for that era in the future. Mixed with that, we have little throwbacks and tidbits of information to the past. There are portions in the book where characters mention prior events that add more information to the future society, like the mentions of special events that happen in our future, but would be common history for the characters.

Overall, despite the various cliché areas, I didn't think it was a bad book. It's written reasonably well, despite a generic plot, the author has an interesting style of writing. I would like to read more from this author. I would probably like to read the next book in this series, in fact, just because it's kind of an interesting future for our society and I'd like to see more of that. As for this book, I would rate it three stars. It's not terrible, but it's not brilliant either. I'm choosing to mark it up a star because I thought it had some redeeming qualities to it. I was particularly impressed with the way the author wrote the future society and thought that was well done. The characters and plot could use a lot of help, though.
Tweet