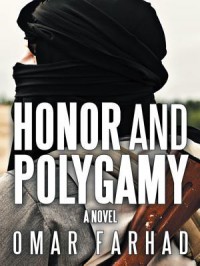 I received a copy of this book in return for an honest review.

Honor and Polygamy by Omar Farhad is short novel about Nicholas Blake, an American diplomat. Soon after returning from assignment, he is again sent out. He arrives in Afghanistan, is soon kidnapped and held hostage. He escapes after many months and takes asylum in the house of Gulbaz. Eventually, in another attempt to stay alive, he must become one of the community and marry Gulbaz's young daughter, Shaista.

The author has an interesting writing style, choosing to write in present tense rather than past, unlike many other books I've read. There were one or two places where it got a bit muddled, though it was easy enough to read. It was a little preachy in some portions, against the US government, which sort of ruined whatever moments the author was trying to present. Though, I tried to ignore those bits and get on with the story. As for pacing, the plot moved somewhat quickly, despite it taking place over two years (I believe, as was mentioned near the end). I appreciate that the author felt it necessary to explain some things for the audience as there were points I didn't feel that I understood completely until the author had presented us with further facts on the matters. I also appreciated that the author took the time to write out the meanings of the various non-English words.

As for characters, I thought that Nick was a good character. Though we did not get to see very many personal thoughts about things other than his kidnapping, missing his family and his potential escape. I felt he displayed a good level of intelligence and the author did not give Nick poor choices just to move the plot along; Nick had a lot of common sense. The other characters were fitting for the story. I felt that Gulbaz was a very genuine man; he was very patient with Nick, even going out of his way for protection of his guest. It was kind of unbelievable that Nick and Shaista fell in love at first sight, but their relationship was kind of sweet. It was somewhat heartwarming that he made promises to protect her and did his best to try and fulfill them.

Overall, I thought that the ending was fitting for the situation, though thought it sad. I thought the book was an excellent mix of all sorts of aspects. I believe that it deserves 4 stars and I would like to read more from this author in future.
Tweet