The Dark Age: a short story 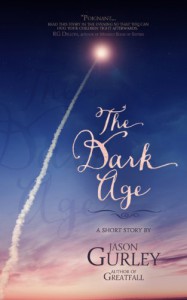 I got this on my Kindle Days ago and played Kindle roulette, so I'd forgotten the blurb in the meantime. Though it's meant to be a short story, I felt it was a little too short. There are many things that could have been explained in the beginning of the story because it left me wondering a bit about what was happening. Basically, the partner gives birth and he immediately leaves. Next we know, he's on some space ship bound for... Anywhere I guess... I might have just missed it, though.

For something in the science fiction genre, I didn't really feel that it was fitting. It could have legitimately been a novel about him sailing around the world and getting trapped on an island or something and it would basically be the same. The child, Elle, would still grow up without him. I could think of at least half a dozen plot line changes that would still leave the tale with the same effect. The science fiction genre was basically the reason I'd "bought" the book and I was somewhat disappointed that it was merely a background element that didn't really fit.

There were a few irrelevant things about the story. I didn't really feel that the idea of the crew sleeping around with each other was relevant to the story. I felt that his thoughts of suicide were a bit unnecessary as well because it of the way the author has written it. To me, it just didn't seem like he really meant it.

I think many of these problems might have been fixed if the story was longer and these elements were better explained. Though it was a little bit heartbreaking, I don't think I enjoyed it as much as I should have. Three stars is generous, I think.
Tweet