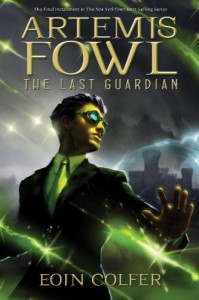 I admit, I read this quite quickly to begin with; it's only the first day and I'm writing this review already. I am completely enjoying the book and have only read it in two days.

I completely adored Opal's "escape" from prison. I thought it was the perfect ending for such a great criminal. In The Time Paradox, I enjoyed reading about how obnoxious Artemis thought his former self was. It was intriguing to read how awful Opal thought her own past self was. I thought it was great to read how she had her former self killed just so she might escape (and then once again try to take over the world).

Though I still feel the twin brothers are a bit useless, I found them a little more amusing than I thought prior. I especially liked their little battle with Juliet in the beginning. "But it's not even my Birthday!" They have some use throughout the novel and, like Juliet, give the fairies information of the manor and inventions within the house.

I liked the various trickeries within the novel. I always enjoy when there are things one isn't expecting. One of the things I particularly liked was when Artemis was when Artemis and Butler tricked one of the twins to reveal his fairy inhabitant. The other trick I liked with Artemis' eventual plan and the way he knocked out Holly.

My two favourite parts of the book were the entire starting sequence- Opal's escape- and the end sequences with the final portions with the gate. I'm glad that Nopal had some use in the end of the series, that she wasn't just some soul-less shell; she saved all of human-kind. Which, I think is ultimately a little ironic considering her true self wanted to destroy the Mud Men. Opal's death was quite fitting, I think and I quite like her as a character.

Artemis' regeneration was one of the best bits and enjoyable considering how thouroughly he'd planned it. Despite the mentions of re-introducing him to his parents, I think it would be quite an interesting plotline if he weren't Artemis Fowl anymore and took on another identity for various plots.

One of my favourite bits is that the book not only finished the same way as the series started (the bits about going to find the first fairy to use her book), but it also ended in the same place with the majority of the (still alive) characters. I liked the way the majority of the characters ended up. Juliet went back into servitude for the Fowl family and Butler is near retirement (especially considering his heart conditions and the various fairy healings). I also like the "returning" the Earth to a lower portion of technology. The epilogue was essentially quite lovely and although the humans have not given up on technology, it seems nice to consider them using the technology they already have than making more. Also, it seems nice to reuse (though, not repeat) old points and tie up loose ends; Nopal, the creation of Nopal, the institution, the magic surrounding Fowl Manor and many other things. The majority of plot lines were tied up quite nicely by the end and I can't think of anything I'm still wondering about.

Other notes:
-I like that we get to read more about the Lower Elements and get introduced to their everyday life. I like the continued psychological problems of the Atlantis Complex and the way it consistantly brings Artemis down below (as well as Butler). I can't help but feel amused by Butler's consistant problems; noticeable in Mud Man society and standing out even more in Haven. I have to feel sorry for him, but it is somewhat amusing. I was quite amused by his transportation on The Stick and the way Foaly had Silver Cupid built especially for their visits to and from the surface.
--Over the course of the books, considering this is the last one, I would like to have read more of the Lower elements and their society. A lot of what we read had to do with preachy messages and bitter comments of humans having driven them underground (in fact, The Last Guardian was basically completely about it). However, I think more of the People's society would have been interesting to read.
-Number 1's parts of the novels seemed a little downplayed overall. As a background character he was fine and he had reasonable parts in all of them. However, I kind of wish that he had a larger part in the overall scheme of things.