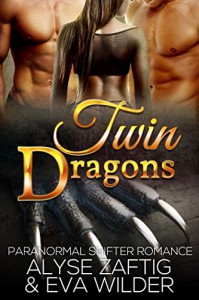 We begin Twin Dragons in Seattle, the introductory character inspired to visit the city because of the Donovan series by Elizabeth Lowell. Our narrator, Gail, is sight seeing at the Space Needle and soon something bad happens. Eli, her saviour, is a good looking guy and they soon agree to spend more time together, along with his twin brother, Tyler.

The characters are all kind of awkward. Both twins, though the writing makes it as if they're trying to hide their importance, brag about their lives more than necessary and don't seem modest in the way that the authors try and make it seem. If anything, they sort of make comments about their wealth and pretend to be nonchalant about it, like passing it off as if it's nothing despite the fact that they were bragging about it. They also flash around their money, leaving a generous tip when paying for food and later try and show off multiple apartments and a jet. The pair of them just ends up being really nasty and very dislikeable. Gail is somewhat of an awkward character as well, right from her meeting the pair, she sort of acts as if she's taking advantage of them. For example, when they've gotten to the elevator to leave the site, she notices two other girls and tries to show off that she's with the twins by putting her arm around one. A lot happens to her, which I'll touch on in a bit, but it just seems like she lacks basic emotions. She doesn't seem afraid when scary stuff happens. She seems to lack happiness, even later on in the book when she's known the pair for a while. She's just completely unrealistic. The sex scenes were awkward and completely strange. As soon as the twins get the girl back to their penthouse, they rip her pants off. There was no real build up to it and it just came out of no-where. This just makes it awkward. Seriously; what kind of whacko person raises their son to rip off a woman's pants as soon as they get her home? It just felt creepy. Not to mention, it seemed that Gail was not willing in some portions. It mentions that one of the men has to "force" her mouth open for oral sex, that he gets "resistance" from her when he tries to penetrate her. In the next scene, she makes a run for the door but is sort of captured by the pair and forced onto the ground, furthering the sexual session with her as a sort of hostage. It is just not sexy. It gets creepier and creepier, in fact. They're raping her.

The story begins by presenting a nice scene and giving us the impression of some sort of tourist view, one which many of us have or will experience. I actually thought that the beginning of the book was quite promising. However, my mind was soon changed by later events. I find it kind of annoying that after the incident where Gail is put in danger by the failing railing, nobody bothers reporting it. None of the characters bother complaining about or reporting it to someone who can do something to fix it. It seems like it's a very serious incident, yet no-one seems bothered by it. The same with many other dangers within the plot. No-one seems to be taking many of these dangerous events seriously. I can sort of understand the twins not being very afraid because they might be used to those situations, but our narrator Gail doesn't seemed freaked out at all. Even during the portions where the twins were forcing themselves on her, she didn't have any emotions whatsoever. She wasn't freaked out or even enjoying it. This is completely ridiculous because she mentions them forcing her to do things and even her trying to struggle against them while they’re doing it, but she doesn’t seem scared at all. Even afterward, the strangest thing is that she doesn't try to escape their capture of her. Her behaviour just baffles me. She has no common sense and just seems completely unrealistic. Then there's the fact that, after the first apartment was destroyed, she wasn't allowed out of the second apartment (by Eli) for nine months. So, she's essentially been kidnapped. The supernatural and fantasy aspects aren't very well presented. They happen suddenly seem to be the cause of convenience (to the plot) rather than presenting them out of reasonable thought. It just seems like the authors add things which they think are cool, for example, saving Gail by having her teleported away from danger. It just seems silly because the events aren't explained properly. Also, the dangerous aspects that happen within the plot (such as the burning of the apartment) are poorly explained. They have little set up, most of the time the excuse being that Gail was asleep so there's no narration to give us a proper explanation. Later on, it seems as if she's kidnapped and it just seems completely out of the blue because we didn't experience the kidnapping with her.

The plot was poorly developed and, despite having some sort of bad guy trying to attack the twins & co, it just seems like the twins are far more evil to Gail than anything the enemy did; they raped and kept her hostage. I know it's written as if it's meant to seem like they're doing her some sort of favour and that she doesn't mind, but that's just completely not what it seems like. She mentions (during the sexual encounter) about being forced and even trying to escape. Then later, when they took her to a secondary apartment (for safety, because the first got destroyed), she mentions wanting to leave but Eli hadn't let her leave. In addition to the poor plot elements, the characters were poorly written as well; none of them seem genuine and they all lack emotion. At many points, they flash around cash and none of them seem to have much common sense. I just don't really know how to summarise this book. It just wasn't good and I'm really disappointed by it.