Night of the Bonfire: A Michael Quinn Novel 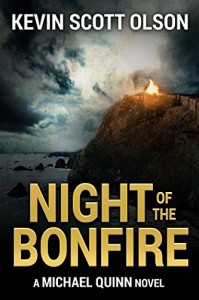 Night of the Bonfire is the first novel in the Michael Quinn series by Kevin Scott Olson. Prior to this, I have also read one short story entitled "Breakout" by the same author, which also features Michael Quinn. I'll begin by explaining Michael a bit. He's an American special operative, formerly Navy SEAL and now doing various tasks for the CIA. In regards to his work, he's very smart; he doesn't take unnecessary risks and does his best to keep any operation professional. Night of the Bonfire, we begin in the middle of an exciting operation in Mexico that he's been working on. From one assignment to another, we soon find ourselves following him to a new mission to find an old painting, thought to be destroyed by the artist. In present time, Marco Leone and Victor Orlov are two art collectors. They're both willing to do anything in order to get this piece. It's Michael's job to secure the artwork.

The main thing I like about Michael, the same in my experience with Breakout, is that he does his best to make the smart decisions in any given situation. Nor does he do things for any needless violence or adrenaline fix. In the beginning of the book, we can see this best; he has his part to play in the plan and then he takes a step back for others to do their own bit. It's something that's quite obviously missing in many movies and television shows; that in those cases, the characters just don't know when to take a break. Michael, however, doesn't do it for glory or attention. He does his part and knows better than to put himself in a dangerous situation unnecessarily. The other characters each have their part to play as well. Marco Leone and Victor Orlov were fitting foes for our main character. Both seemed intelligent and took reasonable risks to ensure that their operations remained functioning. Marco in particular; his security is fairly tight he tries to keep himself, his belongings and his party, safe at all times. Sienna is a great character as well. I appreciated that she's something more than just a brainless arm attachment to Marco. She has genuine intelligence; she was very cautious, she speaks well, she's multilingual and a former art student. I also like her history and felt that her past seemed somewhat interesting.

The plot is very well developed and the author has created a very structured book, with a mix of varying things for many audiences to enjoy. There are aspects of espionage, action scenes with explosions, a car chase and a few fights, a priceless painting thought to be lost for many years, plus a little bit of romance to bind it all together. The CIA operations are very functional. Though we only meet a few of the people involved in these plans, it's obvious that there must be heaps of other people involved. The same with the actual set up; there's obviously a lot of work and research gone in to the operation. I think that works well because we know that it's a huge operation, but the author doesn't clutter the story with needless scenes, research or people that we might simply forget in five minutes. I don't actually have any complaints that I can think of in regards to plot or writing. The only thing I'm really confused about is that Michael uses his own name during the operation. It just seems silly to me because, in theory, one might simply trace his name back to some aspect of his past. For example, pretty much anyone can discuss you at any given time. All it takes is for one, newly unemployed henchman to go to a new job, only to find Mr Quinn in a new operation which involves some sort of new cover identity. Of course, I'm sure any henchman would likely be swept up into custody of whatever agency is fitting, but it could be other people connected to the first operation that could be a problem; cleaners, lovers, anyone who met him at a restaurant or party. Having made that point, however, I can see why the author chose to keep Michael's name as is and simply edit his past. I'm sure it's difficult for a character to take on a new identity and that might only serve to confuse the book. Another thing that bothers me is that Sienna gives Michael a tour of Marco's home during a visit. Personally, if I were Marco, I wouldn't allow that to happen as anybody could use that information to do violate his privacy. Even if it weren't Michael to use the information, he might have still shared it with someone else who might use it.

Overall, I'm thoroughly impressed with the book, the characters most of all. They're smart and feel natural; many with past lives that we get to learn little bits about. The plot is thrilling and takes the idea of an art theft, mixed with a little espionage and action. The author writes well and develops both plot and characters without clutter. All of these aspects create a novel that is both original and exciting. I definitely would love to read more of Michael Quinn's life and eagerly await his next adventure.