Building a Financial Fortress: Lessons from the Great Recession for Savers and Investors 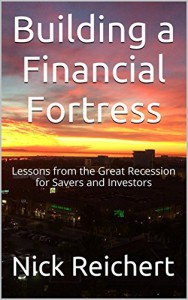 I received Building a Financial Fortress by Nick Reichert via a Firstreads giveaway. This review is just my honest opinion about it and I hope not to offend anyone.

Firstly, I'd like to mention that I know a reasonable amount about investments. Don't get me wrong, I'm not an expert, but I do know a reasonable amount to get by. However, I put that all aside and pretended like I was a beginner to see what this book would teach me. The book is not for beginners, I'll tell you that to start with. It's not just that it uses unfamiliar things is the problem, it's that it doesn't explain any of them. It doesn't even have some sort of glossary for someone to look up words or practices they don't know. Another thing I'd like to touch on at this point is that it's primarily for people in the US economy. I'll just mention here that I'm Australian and, because of that, much of the information in the book seemed useless because they're suggestions primarily fit for the US market. Going on with that, though it's meant to be a book about learning to create strong a strong financial fortress, it doesn't actually do that either. It almost treats you as if you already have a financial fortress, but it is just telling you a little more about it. IT expects that you already have things like stocks, investment properties, life insurance, etc.

On a similar point, the author does tend to advertise his own investments several times, even though they might be irrelevant to the reader. Many times, he goes on about how he has invested in gold and silver, mentioning again and again about how he buys coins and keeps them in a safety deposit box, checking their value on eBay. It's not just the one time, either. He mentions that point over and over again, at least three or four times. I'm not denying that it's a valuable investment, but the way he goes on about it means that it creates a lot of wasted space in the book. The odd thing is that he, once in one article, then tells you not to buy silver. One chapter, he also advertises Omeros, which he has stock in. This would have been a great opportunity to teach the reader about taking stocks in various companies. He doesn't really explain what goes on with his stock, but wastes a lot of time informing us what the company does. That is ultimately useless because I have never heard of the company before, I don't even know whether it matters to me that he's taken stock in this company because I'm Australian and that company probably has nothing to do with me. Sure, you might think me complaining about nothing, but my point is that the author has taken up a huge portion just by explaining a company that might not even be relevant to the reader. That space could have been taken up by information more valuable. In the notes I was taking about the book, I also made mention of an article beginning on page 69 (in my copy, it might be different if you're reading a different edition or an ecopy). The chapter begins with a quote about not investing in the stock market, that one ought to invest in family. The author asks something like "what's wrong with this picture?" He then goes on about the value of gold again and doesn't answer his own question. Well, if he did, he doesn't inform the reader.

Going on about wasted page space, it's not just because of some of the articles. As much as I hate to say it, it's a poorly produced book. Being that the articles were originally for online viewing, I don't think that the author (and whoever produced the book) has taken much care to fix it up for readability in a printed format. Firstly, the formatting of the actual text is dodgy. For no reason, quite a few points of the text is randomly treated with things like underlines and even tinting it to a paler tone. All of the text is printed close to the margin/ spine so that, sometimes, one can barely read it because you can't open the book wide enough. Many images are low resolution because the author hasn't obtained higher quality graphics. Subsequently, because of the low resolution, the images are grainy, blurred or distorted. That ordinarily wouldn't be a problem as it's something I can live with. However, this effects the graphs as well. The entire book has a heap of graphs about investments and many of these are distorted. There are cases where I can't even read some of the text on the graphs because they're too low in quality. Going on about the graphs, now that I think about it, there's a lot of wasted space in the book and a lot of the fault is due to these graphs. Some of the graphs are larger, yes, but many of them are small and could reasonably fit on a page along with text. However, many graphs have a whole page to themselves, which leads to the aforementioned wasted space where there are huge blank spaces. Quite a few of them, in fact. Going on with that, there are one or two portions where the text has not been formatted properly and there are run on sentences that go over onto a new page, the rest of which is left blank because it's the end of the chapter. There are several "Quote of the day" pages as well which suffer the same treatment of as the graphs. They take up little space, but after the quote is done, the majority of the page is left blank. None of this is very cost effective. It is also a waste of paper.

I didn't learn much, admittedly. When I won this book from Firstreads, I thought that this might be a book that might provide valuable knowledge to me that might help my financial future. I am quite disappointed that the majority of the information was not relevant to me because I am simply not in the American marketplace, or in some cases the information not even being legible. However, I will try to finish off this review with a summary. I, personally, would not refer to this book as a good investment. Firstly, it's not for beginners and does not even consider that the buyer might have little knowledge of investments. Even with the reasonable amount of information I did know about investments, I found this to be somewhat difficult. Another point being that since it is a re-publication of a blog, you're essentially paying for something that you could already get for free and, on the internet you could probably find other materials that would suit your needs. The articles inside the book can get repetitive; for example, how I mentioned the author telling us over and over again about his investments in coins. Another point is that I was able to get through the book within less than an hour. That's problematic being that this is a non-fiction, meant to be informative and intended to teach you how to set up a financial fortress. However, the reason I got through it so quickly is the author's repetition and also because of the wasted page space, many of them being mostly blank. Just now, I glossed through the book and roughly estimated how many pages are wasted, just based on the blank spots. From my analysis, I reckon that an entire third of the book is essentially wasted with these portions.

Overall, I reckon that this book has been presented particularly badly for all of the reasons above. To reiterate, I don't believe buying this would be a valuable investment. I've weighed my considerations and I think the bad outweighs the good substantially, I don't believe this is worth even two stars. I am truly disappointed with it; It could have been such a valuable tool for my future.
Tweet