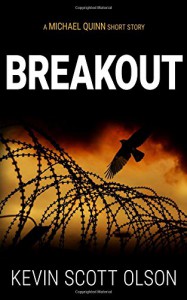 Breakout by Kevin Scott Olson is a short story, part of the Michael Quinn series. We begin the story with an American prisoner in a Mexican prison. Thought to be a tourist with a bad sense of direction, it is critical that he escapes prison before the authorities find out who he truly is. That's where Michael Quinn comes in. He's a special operative with the task of saving the guy.

Though it's a short story, I think that we get a good look into the operation. We don't get a full view obviously, but we get little bits of information, the planning, political aspects and waiting that go into such a rescue mission. I actually think that's one of the most valuable aspects of the book; that the characters are smart, patient and are not taking unnecessary risks. For that bit, I think it speaks highly towards Michael Quinn as a character; he's willing to go into a dangerous situation, but makes intelligent decisions to ensure that the plan is fulfilled. In the end, the plan went well and gave me a good impression of Michael Quinn.

There are a reasonable range of characters that are provided. Michael is the primary character, an intelligent and cautious person. Gabriella is the beautiful waitress and dancer he meets at a bar. Jenkins takes the political approach to the situation. I do like that, even though we don't have a complete background on all of the characters, I think it was nice that the author gave little bits of information on them. Like Gabriella's potential dancing career, for example.

Overall, the book was well written and I think that the book has been well planned; everyone has a part to play and they do it as well as possible. The book is predominantly in English, but with a few Spanish comments and phrases. I did three and a half years of Spanish in high school, so I understood those terms and the phrases/ words used are fairly common so I imagine that most people with a basic knowledge might understand. Otherwise, I look forward to the rest of the series, Michael Quinn and the rest of his exploits.

I was lucky enough to receive a free hard copy in return for an honest review.
Tweet