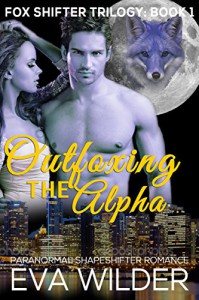 Outfoxing the Alpha is the first in the Fox Shifter Trilogy by Eva Wilder and Claire Ryann. We begin the book with Carson Warner, a fox shifter and potential buyer for East Shore Shipping. Carson has come to meet Frankie "the Man" Mansfield. Thinking that his appointment is with Frances, he is somewhat surprised when a young woman turns up. He soon realises his mistake, that this is actually Francesca, the company's CEO. Soon, they become obsessed with one another and use the East Shore Shipping Company as an excuse to spend more time with each other.

The characters were kind of dull and cliche. The intention of Frankie is to be some sort of controlling ice queen, while Carson is a desperate and needy man. Both of them are meant to be powerful, but I just don't see enough of this trait in either of them so it's kind of gratuitous rather than important. The same can be said of East Shore Shipping. The author gives us the gist of the company, that Frankie inherited it and made it even more successful, but we just don't get enough information on the importance of the company. We get told that Carson is (for some reason) obsessed with it, but we don't get the full story on why he wants it. There are some other things about the story that don't make sense. For example, continuing with Carson's obsession in obtaining the shipping company, he even goes so far as to offer three times its worth. Yet, he didn't even do the basic research to know that Francesca was the CEO and would come to the meeting...? Going back to Frankie, it just seemed odd to me that she was hugely proud of the company she had helped for so long. She mentions, many times, about her own obsession and love for the company. Yet, it just doesn't make sense that she would willingly give it away for simply being turned into a fox shifter. We get almost no explanation of why she wants to be a shifter. I don't appreciate their relationship; it just seems very insincere. Before meeting that one night, neither had any particular feelings for each other so it kind of makes it a "love at first sight" thing. After they get together, Carson decides that they're mated and they start up a relationship. Yet the authors glosses over this very quickly, which leaves it kind of confusing because I just don't see them as fitting for each other. I just don't think that their relationship has been well explained.

The plot is decent. However, as mentioned prior, I just don't think that it has been explained well enough for it to be impactful or unique. It's a very hurried story and I don't think it works well for the book; it jumps forward several times without warning and subsequently we have little explanation of important events. I didn't think that the supernatural elements were necessary to the story. It just seemed gratuitous. The fox shifting portion isn't particularly well explained and provides little use to the plot. All Carson does is turn up at the company in fox form and eventually shift back to human in front of her. The reason I say that it was little use to the plot is that he was using his shifting to snoop, but it was ultimately useless because he turned back into a human right in front of her. He just may as well not have bothered.

Overall, it was a decent story. However, I'm not very impressed with either the characters or plot. I think that it needed a lot more work, meaning no offense.