Boudicca: Britain's Queen of the Iceni 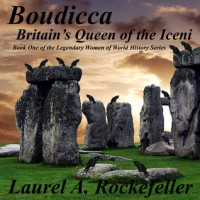 Moira, a young girl asks for her mother, Keita, to tell her a story. This book is about Boudicca who was queen of the Iceni, a Celtic tribe who led an uprising against the occupying forces of the Roman Empire. It's a quick read explaining brief moments in history. I obtained a copy of Boudicca: Britain's Queen of the Iceni by Laurel A. Rockefeller from a Smashwords coupon code at the end of last year.

I'm pretty disappointed with this book. Though it has the interesting premise of history, I felt that this retelling was poorly planned and written. Events flash forward extremely quickly and we are left with little explanation as to what happens in each scene or between the scenes. It even flashes forward months and years at a time with barely any mention as to what happens in the missing portions. The characters, despite being based on real people, are lame representations. They do not feel even slightly genuine. The conversation between characters is unbelievable as well, moreso because the author has tried to base it on current day talk. Also, some characters act completely against the traits the author has given them.

The document I have of this book has links to a website, though once I visit them I find that they're not availible. I think this is particularly impractical because the author seems to be using these links as some sort of reference material, though they fail to properly explain these portions in the book. Without the necessary information on the matter, the characters seem to be kind of meaningless and lack the proper explanation. The author gives us links (that don't work) and expects us to read into the material ourselves. It seems that even they don't respect these people or times, especially not enough to give decent explanation to their own writing. I find this to be quite a lazy approach to writing.

Overall, I'm disappointed. Having read into the basic history of these people afterward, I feel that it could have been such a great story. Yet, as I've said above, the story has been poorly planned and written.
Tweet