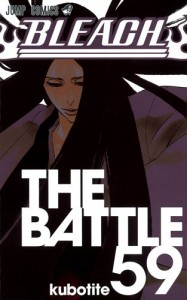 The battle and history between Captains Unohana and Zaraki were most enjoyable. I particularly liked the twist that Unohana was much like Zaraki. I'd originally thought her harmless and almost fragile. But, it seems almost natural that she stemmed from such a bloodthirsty past, almost as if she was now trying to make ammends for the many battles she'd fought in the past.
I'd originally sort of resented that she seemed somewhat weak, but this completely makes up for it.

I also like the history of Isshin and seeing him in his captain stage is really enjoyable compared to the huge dork we see him as when he's just Ichigo's father. I also liked the minor historical aspects of Hitsugaya and Matsumoto. It seems amusing that Matsumoto was passed over as captain. I wonder whether she is resentful for that fact.
Tweet