Book Review: Song of the Sending (The Expatriates #1) by Corinne O'Flynn 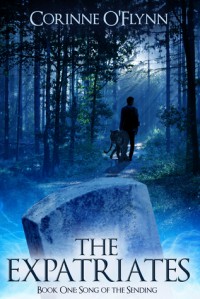 Title: Song of the Sending

Obtained: Won an eBook copy via a Giveaway

Song of the Sending by Corinne O'Flynn is a young adult novel, full of adventure. Despite living in a travelling carnival, James "Jim" Wales feels like he doesn't belong there. He's always felt as if he's not from the Modern World. One day, he receives a bird messenger, carrying a note from someone he believed to be long gone. Black Riders soon attack the carnival, led by a terrorist named Eldred. He is what is known as a Scholar, born with a symbol. As it turns out, Jim has a similar one. He is the one that Eldred hunts.

I wasn't impressed with Jim. He's an alright character, but he's kind of dull and the situations surrounding his life aren't the most original. Many are reminiscent of other young adult series that I've experienced. I thought that many of the foreground characters had interesting points to them. However, I felt like the author could have cut back a few characters. A lot of background characters were mentioned, despite having no part to play in the book. I wasn't a fan of the Jim / Charlie relationship; it didn't seem like a very important part to the plot, in my opinion. I can appreciate that he has feelings for her, but I think he had better things to think about and (to me) it kind of seemed disrespectful to the people who had died. I didn't really like Sam; as a character, some of his comments seemed depressing and I felt like some of his actions only served to make him seem like a third wheel.

I didn't necessarily appreciate all of the magical happenings. Charlie's magical power development seemed odd as she had no indication of it before going across the bridge. It did have an important part to play in the book, but I think it could have been better explained. I appreciate that there are differences between Bellenor and the Modern World, but a bunch of things don't make sense. For example, Bellenor and the "Modern World" were separated centuries ago due to the "Great Shift". The Modern World has advanced to present day, with Bellenor stuck in some kind of medieval/ Middle Ages setting- or so it appears to the characters. Why has Bellenor not advanced from that point in time? More to the point, why are they able to understand each other so easily? Not to mention, the people are speaking English, no less. In centuries, the English language has changed a LOT as it's taken on new words from all sorts of countries and it mutates day to day, depending on slang and new inventions. However, the people in Bellenor speak modern day English, but that doesn't make sense; they would have a lot of differing cultures depending on their own people. So, although they have travellers from the Modern World, they would likely have their own language. I could understand similarities, but not the exact same language. I think that some other things are unclear as well. In the beginning, it almost seems as if Jim has little knowledge of Bellenor. Yet, later on, he seems to have more knowledge of it- and the events during the family's departure- than others have.

Overall, it was fairly well developed and I can see that the author has put a lot of details into even small, unimportant things such as background characters. Not all of it works out, in my opinion; I feel like some of it is unnecessary. However, I admire the author's dedication to building such a comprehensive introduction to the series. Whilst I wasn't a fan of many characters or all of their actions, I found that there were some intriguing points to their personalities and some of the choices they made.

I won an eBook copy of this book via a Giveaway and these are just my honest thoughts on it.